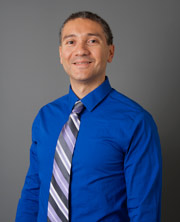 AAAS/Science Program for Excellence in Science Nomination 2013
Award: 2-year sponsored membership in AAAS (the American Association for the Advancement of Science)/Science.

Scholarship 2007
Award: $200, meeting registration fee plus travel and hotel expenses. Awarded by Steering Committee of the “Essentials of Pain Management: Principles and Practice” program to attend its 2-day course and the 26th Annual Scientific Meeting of the
American Pain Society.

My career goal is to identify brain mechanisms involved in the transition from acute to chronic Temporomandibular Disorders (TMD) pain. This will support the development of improved prognostic markers and individualized treatment strategies, leading to reduction of health care costs and improvement of patients’ quality of life.

In order to achieve those goals, I use psychophysics and neuroimaging methods to measure somatosensory function and its related brain mechanisms in patients suffering from orofacial pain (OFP), with a focus on chronic TMD pain.